The Group recorded revenue of S$681.7 million for 1H FY2021, an 8.8% year-on-year (yoy) decline from 1H FY2020 mainly due to a high base last year underpinned by an elevated demand arising from the government imposed ‘Circuit Breaker’ amid the Covid-19 pandemic.

Administrative expenses decreased by 12.3% yoy to S$113.4 million in 1H FY2021. Out of this decline, staff costs fell by S$15.2 million in 1H FY2021 as the Group paid out higher bonuses and additional one-month salary (for all staffs except directors) to reward staffs on sterling sales performance in 2QFY2020.

Cash generated from operating activities amounted to S$70.4 million in 1H FY2021 despite lower business volume and changes in working capital requirements. There are no major changes to the payment cycle. Cash used for capital expenditures in 1H FY2021 amounted to S$5.4 million and the Group made a partial repayment of term loan of S$10.0 million. Total cash and cash equivalent stood at S$248.0 million as at 30 June 2021 (as compared to S$253.9 million as at 31 December 2020).

In view of the Phase 2 (Heightened Alert) imposed by the government from 22 July 2021 to 18 August 2021, it could result in a higher demand for our products as compared to the same period last year. However, as Singapore pivots from pandemic to an endemic approach in dealing with the virus and with the gradual easing of Covid-19 linked restrictions, the demand is likely to taper in the second half of 2021. Going forward, there will also be comparatively lesser government grants as the pandemic situation stabilises with higher vaccination rate.

Covid-19 has impacted the supply of new HDB shops amidst tight measures taken in 2020 to curb the spread of Covid-19. In 2021, there were a total of two tenders of which the outcome has not been announced. The Group will continue to search for new retail spaces in areas where it is yet to build a presence and to nurture the growth of its new stores and improve comparable same store sales.

Competition is expected to remain keen among the brick-and-mortar supermarkets and online players. Even though there were no serious disruptions to the food supply chain due to Covid-19, there are still risks of disruptions that may be caused by weather, geopolitical developments, or breakdown in international shipment.

On the future plans of the Group, Mr Lim Hock Chee, the Group’s Chief Executive Officer, added, “While our expansion plans in Singapore have been impacted due to the pandemic and the release of fewer tenders of new HDB shops, we continue to be on the lookout for new retail spaces, particularly in areas where we have yet to build a presence. Our expansion plan in China is also moving forward, having recently announced that we have signed lease agreements to set up two new stores in China.

The Group will also remain focused on improving same store sales in Singapore and China, working to drive cost efficiencies, enhance gross margins by working towards a favourable sales mix. In appreciation to our shareholders, the Group has also declared an interim dividend of S$0.031 per share.” 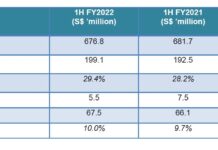 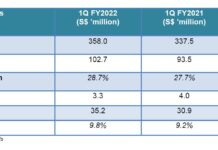 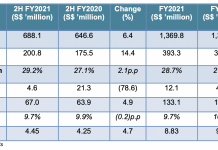 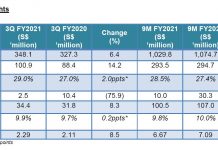 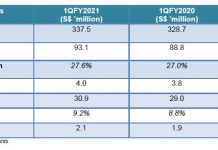